Only a moment she stayed, but what an imprint she left on our hearts… 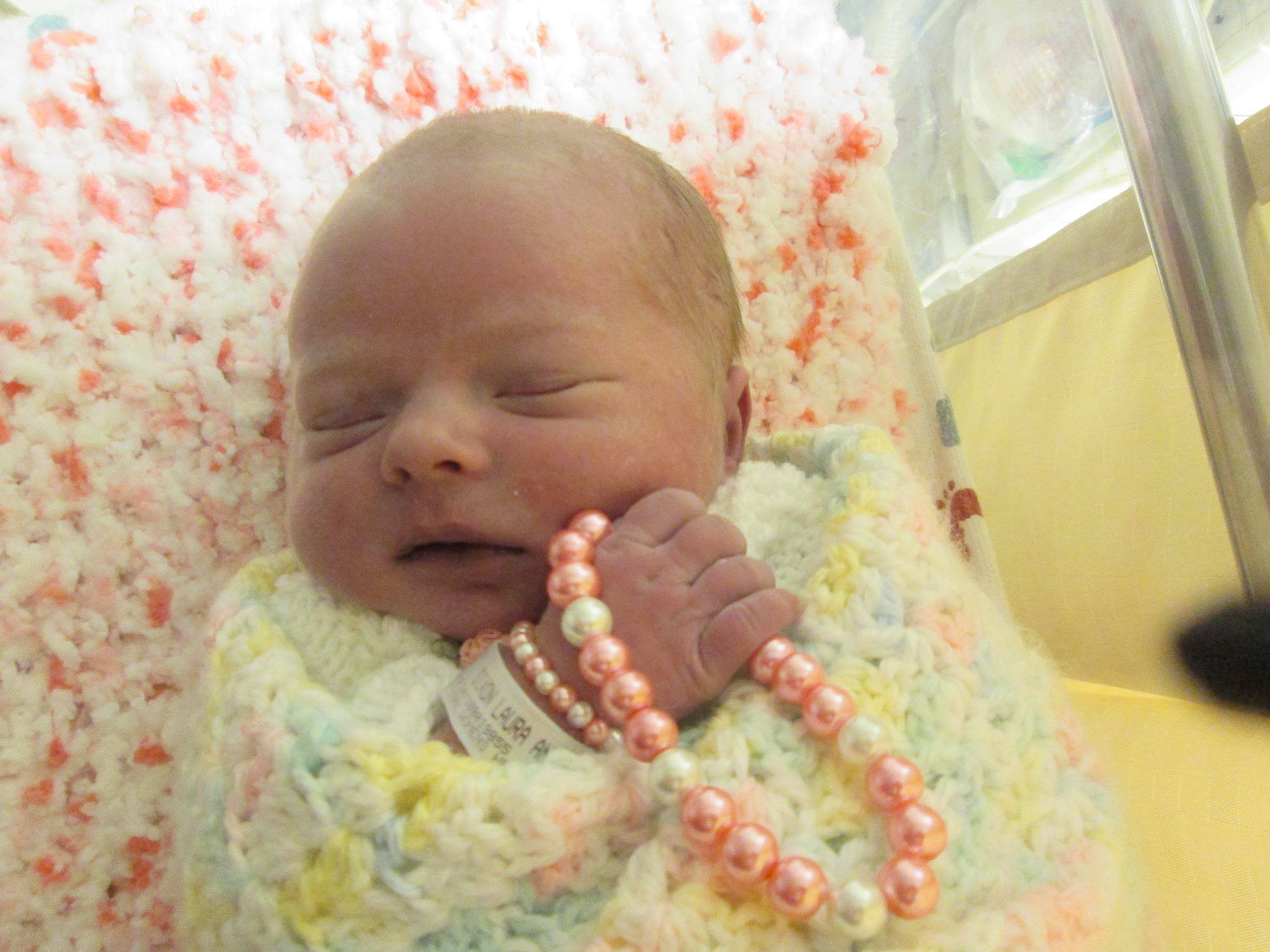 When asked, most people wouldn’t say the same date for their best and worst day of their life. But if you asked my wife Laura or I, we would both tell you the same thing, April 30, 2014. That is the date that our beautiful daughter Avery Marie was born at 5:52 p.m.  It was also the date we found out Avery wasn’t meant to be with us very long.

Laura & I were married in June 2012 and decided it was time to start a family in August 2013. To our surprise we found out we were expecting on September 6, 2013. We were elated! According to the doctors we were experiencing a completely normal, healthy, and “boring” pregnancy and were told delivery would be the same. However, Laura experienced swelling relatively early, around 19 week’s gestation. Doctors told her to stay off her feet or prop them up as much as possible, drink plenty of water, and try to stay away from salty foods. None of which helped. As our pregnancy continued, the swelling got worse…and painful. Laura’s blood pressure was also on the rise, but because it was “below 140” the doctors were not concerned. Laura’s pain and swelling continued to the point that on April 28 (almost 38 weeks) she requested a doctor’s appointment and was crying to the OB for help. He told her to “grin and bear it.” Laura was also experiencing extreme thirst, but was not concerned because pregnant women are supposed to drink a lot of water, she noticed what she thought was Avery’s rear-end poking out below her right rib from time to time (doctor’s thought this could also be Braxton Hicks contractions), and Laura was concerned because Avery’s movements had slowed down. “Completely normal,” the OB said, “she’s running out of room.” The OB sent Laura to the hospital for ultrasounds on her legs to make sure there were no blood clots, which there weren’t. Fortunately, at this appointment on the 28th Laura was told to keep her pre-scheduled appointment that was two days away, April 30, 2014, the day that changed our lives forever.

At this 38 week appointment, Laura’s blood pressure spiked to 155.   The same OB that told her to “grin and bear it” just two days before was now concerned and told us to go to Labor and Delivery to get checked out and see how they wanted to proceed.   Upon admission, nurses began to monitor Laura and Avery. As the nurse who had instructed us just weeks before on childbirth searched for Avery’s heartbeat it quickly became apparent that something wasn’t right. When Avery’s heartbeat was found, it was only 40 beats a minute. Laura was rushed out of the room without us being able to say good-bye where the hospital staff called for a “Code Neon” and performed an emergency C-Section.

Avery was born without a heartbeat Wednesday, April 30, 2014 at 5:52 p.m., but the hospital staff was able to revive her within eight minutes and she was immediately taken to NICU. As our families started to arrive to begin celebrating the newest addition in our lives, I was asked by a doctor to go see my daughter in NICU. The doctor explained to me that due to the lack of oxygen, Avery likely had suffered some brain damage. I was immediately trying to switch gears in my head from having a perfect healthy, happy baby to now being a father of a child with special needs.

As soon as I saw Avery I completely understood the meaning of love at first sight. Even though she wasn’t crying or blinking and had tubes attached to her, I was ecstatic to be with my daughter for the very first time. She was long and skinny like her Daddy and had her Mommy’s big brown eyes. I was then taken to share the news of our daughter arriving with Laura. About 30 minutes later, I was told the NICU staff needed to meet with us for an update on Avery.

As Laura’s mother/first-time “Gramm” and myself gathered around Laura’s bedside with the NICU staff, a box of tissues was placed on Laura’s bed and a chair was pulled up for me. That’s when I knew, the news we were about to receive was not going to be good. In fact, it was the absolute worst possible news any parent could ever receive. Avery was unable to sustain breathing on her own and was declared brain dead.

At that moment, the tears flowed and questions arose. Feelings of disbelief, sadness, and anger all emerged. Our time with Avery was going to be brief.

It was also during this time that we noticed something wasn’t right with Laura, who should have been more coherent coming out of the anesthesia by now.  As we were still trying to process what happened to Avery, we realized something was very wrong with Laura who still wasn’t herself as we went into the wee hours of May 1, 2014.

Avery officially passed at 12:30 a.m. Thursday, May 1, 2014; just six hours and thirty-eight precious minutes after gracing this world with her presence.

It took Laura over 13 hours to fully come out of anesthesia. It took 72 hours for hospital staff/Maternal Fetal Medicine to diagnose what happened to Avery and Laura at which time we also found the explanation for Laura not being conscious enough to fully experience our short time with Avery. You see, my girls were diagnosed with Acute Fatty Liver of Pregnancy. AFLP is a rare and “potentially” fatal pregnancy condition that took my daughter’s life and almost took my wife. Laura too was 6 hours from death herself; all of her organs were failing. Had we been told on April 28, 2014 to reschedule our 38 week appointment or wait till 39 weeks, Laura would not have made it through the night.

Laura spent a total of 10 days in the hospital recovering – 7 in ICU. It was about a year-long recovery for Laura physically and a lifelong battle emotionally for both of us and our families.  We returned home with empty car seats in our cars, our completed nursery would never see midnight feedings, and our monitors would never alert us to our sweet Avery’s cries or giggles.

Through our grief, we knew we had to do something to help at least one family to not hurt like we do. We started Avery Marie Against AFLP, in an effort to bring increased awareness to/prevention of pregnancy complications, pregnancy and infant loss, and strives to help soothe the aching hearts and souls of families experiencing this nightmare. We are focused on helping the areas’ physicians, hospitals and patients all become more aware of pregnancy complications. We were told in the hospital that one out of four pregnancies end between conception and the first year of life. That number is way too high!

As we transition into our role as angel parents, we have already seen just how broken the government system is when it comes to infant deaths. We had to fight tooth and nail just to obtain Avery’s birth certificate. Laura had left numerous messages for the agency we were to talk with about Avery’s birth certificate and never received a return call! When Avery’s birth certificate finally did arrive, it broke our hearts once again. Stamped right in the center in big, black, bold letters was the word “DECEASED”. Immediately, frustration, sadness and anger took over. What in the world was the death certificate for then? How could the government be so insensitive to grieving families? When pressed about this issue we were told from the PA Department of Health that they do it because of fraud issues. Just for clarification, Avery doesn’t have a social security number and one would think that databases are set up for things like credit card applications where a company could easily search both birth and death certificates. Through persistence of our family and with the assistance of Representative Brian Sims we were able to obtain a “clean” birth certificate and were told that the policy had been changed; that all infants born alive will no longer receive the “DECEASED” birth certificate, but one just like every other newborn.

The more we have told our story, the more we have realized we are not alone. Whether someone has lost a child 12 weeks into a pregnancy or at six months old, it doesn’t make it any easier. My daughter has reshaped my focus and for that I’m forever grateful. Avery was going to be a mover and a shaker; I can tell just by the way she has motivated me to help make a difference. Avery has touched so many lives and has forever left a hole in our hearts. She will never be forgotten and we will strive to make her proud each day for the rest of our lives. For all the parents out there, be sure to tell your children just how much you love them every day. 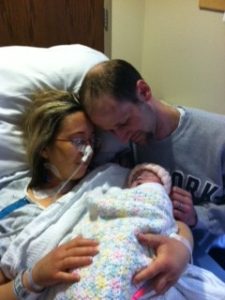