Fearfully and Wonderfully made!

“I praise You because I am fearfully and wonderfully made, Psalm 139:14” …Those were the words written inside a card, reminding me that no matter what the outcome, our son would be born perfect according to the plan of our Heavenly Father.

My story begins in December 2007, when I found out that I was pregnant with Baby #3. My husband and I were thrilled, as we had just moved into a 4-bedroom farmhouse, which would become our “Forever Home”. We wanted to fill it with kids!

Our dream was quickly over as we learned that I had lost the baby. I was 12 weeks pregnant and just made the announcement to our friends and family, and now had to take it all back. We were devastated and my heart was crushed, as we told our older girls about the loss. In early April 2008, we learned that we were pregnant again, with Baby #4. We were once again thrilled, but nervous at the same time. We shared our news and asked our friends and family to begin praying with us, as we went through this pregnancy. We successfully made it to the middle of July, when we had our 20 anatomy scan. The scan/ultrasounds went as expected, and we were told we were having a boy! This was great news, as we already had 2 older girls. We were so excited, we didn’t notice any concern from the ultrasound tech. The next morning, we received a phone call from our Doctor, with the results of the ultrasound. I don’t remember having much of a conversation, other than the Doctor saying that the left two chambers of our sons’ heart were not visible in the ultrasound pictures, and we would need to see a specialist. My heart sank, and I was instantly sick as I relayed the message to my husband. Over the next 19 weeks we met with several doctors and other specialists, all of which confirmed our son’s diagnosis of Hypoplastic Left Heart Syndrome. His heart developed enough that I was able to carry him to term, and December 5, 2008 our son, Todd Heston, was born at the Harrisburg Hospital. He was later transported to Du Pont Children’s in Wilmington Delaware, where he had his first open heart surgery at 4 days old. The surgery was unsuccessful, and on December 12, Todd was given a Berlin Heart, while he awaited a heart transplant.   Todd did not receive a heart, and on December 29th, our son passed away due to secondary complications of his condition. December 30, we made the longest 3 hour drive of our lives, as we drove home from Wilmington with our older girls in the back seat…and no baby brother. 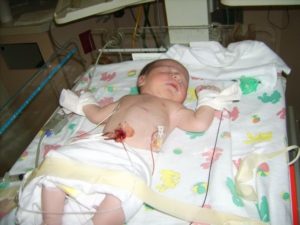 In August 2010, we were blessed with a beautiful, healthy rainbow baby…Paisley Grace! At this point, we thought we were done having children, and our family was complete. However, God had a different plan for us, and our story continues…

In late 2011, we learned that we were expecting baby #6. July 19th, 2012…at a typical OB appointment, it was decided that I would be induced and our baby girl would be born three weeks early due to loss of amniotic fluid. So that afternoon, we welcomed a tiny, beautiful and seemingly perfect, Quintin Riley in to the world. The moment she was placed in my arms, I knew something wasn’t right. She never cried, and her breathing was very slow and faint. After a few hours, Quinn was transferred to York NICU to be seen by a lung specialist. It was there that she was diagnosed with a Metabolic Disorder, as well as an enlarged heart, glaucoma and a list of other minor concerns.   July 20th, Quinn was transported to CHOP, where she would be placed under the care of a metabolic team. After more testing and questions, Quinn was diagnosed with a very rare/severe Mitochondrial Disease, and after a very short time, the medication that was initially keeping her alive, quickly began to poison her tiny body. Quinn passed away on July 24 at the Children’s Hospital of Philadelphia, at only 5 days old. 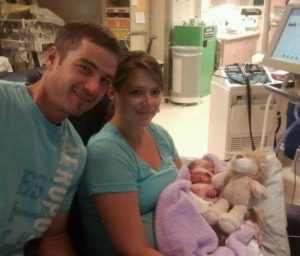 Our family was devastated, hurting, confused, angry and any other emotion you can think of. This loss completely caught us off guard. We were done…no more babies.   Our family was complete…so we thought.

Only 5 short months after losing Quinn, we found ourselves pregnant again. It was too soon, I was still angry, and feeling very physically broken. I honestly thought there was no way I could handle being pregnant one more time, mentally and physically I just couldn’t do it. It had to be a mistake, or some sort of joke. I personally knew plenty of people who would do just about anything to be pregnant, and couldn’t be for one reason or another. And yet, here I was pregnant and angry about it. Talk about guilt! On September 21, 2013 we welcomed another beautiful, healthy rainbow baby…Kolton Todd, named after his older brother.

There isn’t a day that goes by that I don’t think about my babies in heaven. They are a special part of our family…they have taught me invaluable lessons about love, life and most importantly, my faith. Despite their earthly imperfections…Todd and Quinn were “fearfully and wonderfully made”, fulfilling their God given purpose on this earth.

Today, our family is complete…seriously!!